Last month we gave you a preview of The Food Allergy Aware Mock Trial 2021, of which Erudus was a sponsor. Well, the event has now taken place and its findings are sure to give any food business food for thought as we head towards October 2021, when Natasha’s Law comes into play…

First, a recap of the two parts to the event, which happened last month and was held entirely online via Pheedloop, an interactive platform which offers a virtual conference experience.

Part 1 explored a fictional court case scenario in which Caterers have incorrectly labelled allergens and served the meal to a customer, with the Blake Morgan legal team informing the Caterer of the legal responsibilities involved in producing and serving that food and discussing a number of issues such as due diligence and product recall.

Part 2 saw a range of speakers from across the food industry come together and discuss best practices and the overall allergens landscape.

Here’s how Part 1 went down

Ruby Denver booked a 50th Birthday celebration dinner at the fictional restaurant ‘Baby Basiletti’ to attend with her sons.

The dietary requirements given to restaurant at time of booking were (Cereals containing) Gluten and Pea sensitivity, and Nut allergy.

[The restaurant] Director responded to this booking, but did not properly communicate these dietary restrictions to the Baby Basiletti kitchen, due to the illness of the director’s father.

The restaurant’s menu included a pea fusilli which was described as allergen-free. This description was true with respect to the legal 14 major food allergens but didn’t take into account other potential allergens.

An increase in the number of the restaurant’s customers saw this pea fusilli dish being brought into use earlier than they had anticipated.

Meanwhile the green pea fusilli’s Manufacturer recalled the product on the morning of the day of Ruby Denver’s visit - because although it was labelled ‘gluten-free’, it had been contaminated and therefore was not gluten-free.

An email was sent to the restaurant staff but they decided to wait for further information. The Director isolated unopened green pea fusilli, but not that which was already opened. The restaurant later identified that there were possibly 18 contaminated dishes prepared before this recall that were sent out to restaurant customers. The Director called the Manufacturer for a refund and purchased gluten-free stock later that day but neglected to think about the contaminated stock open and being used in the kitchen.

The restaurant Chef also created a pesto sauce with nuts which was not labelled as containing an allergen, and which wasn’t listed on the menu.

Upon arriving at the restaurant, Ruby Denver mentioned her party’s nut allergy at the welcome point, and again whilst ordering. However she did not mention peas and gluten as allergens/sensitivities when ordering.

Ruby Denver’s party ordered their food and upon its arrival:

The following players took part in the trial:

Throughout the trial, the prosecution highlighted several examples of systemic failure on the restaurant and restaurant Director’s part. These included:

The 130 Mock Trial attendees were split into ‘juror’ groups to review the evidence and discuss sentencing.

97% of the jurors came to the conclusion that the restaurant and restaurant Director were at fault in the scenario.

Exactly how culpable they were (on a scale of Low to High’) was a matter of debate between the attendees, with judge Jowett ultimately setting the Director’s culpability as ‘Medium’.

The reasoning for this was that though systems were actually in place to avoid a situation such as this, they were only communicated verbally and were not actually adhered to.

In real life such an occurrence could lead to a fatal allergic reaction. The attendees reflected the importance of instigating and maintaining food hygiene best practice by choosing to prosecute both the restaurant and the business’ Director.

A number of guest speakers also participated in the event, with What Allergy’s Ruth Holroyd discussing her personal experiences of dining as a person with allergies, and Allergy Action’s Dr Hazel Gowland exploring Past Cases: Lessons Learnt and Best Practice.

Food Allergy Aware’s Caroline Benjamin also announced the launch of Food Allergy Aware’s ‘Near Miss Reporting Campaign’. Kicking off in October 2021, it seeks to highlight the importance of registering all incidence (actual and near misses) which occur within businesses in the foodservice industry, reported both internally from staff with a NO blame culture and externally from customers. 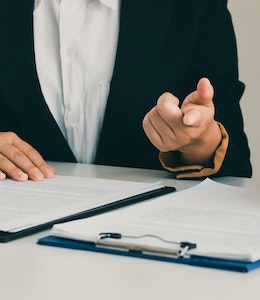