Shrove Tuesday aka Pancake Day aka one of the most enjoyable occasions on the culinary calendar, is coming up.

It’s an opportunity to experiment with toppings, and perfect one of the most simple yet delicious dishes in Western cuisine. Whether fluffy American style or the thin and crispy French crêpe, pancakes are a versatile menu choice that can be served for breakfast or dessert, on the side of a meal and with sweet or savoury toppings.

They’re far too good to be confined to just one day of the year, and so to celebrate the humble pancake we’ve put together a cohesive guide of everything you need to know about them…

A pancake is a flat cake made from a batter of eggs, milk and flour and fried on a very hot surface, often with butter.

Pancakes can be thin or thick, crispy or fluffy depending on the recipe, and are served with a variety of toppings and sauces.

What are the ingredients in pancakes?

The main ingredients in pancake batter are:

Plus, oil or butter for cooking in.

Yes, pancakes are vegetarian. Although they contain Milk and Eggs - which are animal products - they do not contain meat, making them suitable for vegetarians.

No, pancakes are not vegan - traditional pancake recipes include Eggs and Milk (and sometimes butter for cooking in), which are animal-derived products. However, vegans can still enjoy pancakes, as there are many vegan egg and dairy replacements on the market. You can find our tips for perfect vegan pancakes here.

Do pancakes contain any allergens?

Yes, pancakes contain at least 3 of the 14 major food allergens. These are

Depending on the pancake topping they may also contain other allergen ingredients such as Nuts.

It is possible to make allergen-free pancakes, and we have some tips for doing so here.

What are the two types of pancakes?

The two types of pancakes most people are familiar with are:

What are the best pancake toppings?

Some of the most popular pancakes toppings are: 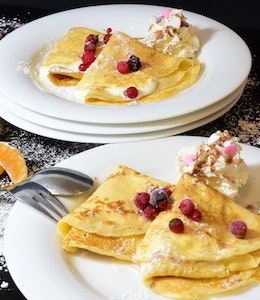 American pancakes are most commonly served with Maple syrup and thin, crispy bacon, whilst the traditional Shrove Tuesday pancakes are eaten with sugar and a squeeze of lemon juice.

In Asian cuisine pancakes might be stuffed with ingredients such as potatoes, crispy duck or spinach.

What are small pancakes called?

There are several types of small pancakes. These are:

Are pancakes good for you?

Pancakes are not exactly good for you but they do contain several vitamins and minerals. They can also be high in fat, calories, carbs and sodium, and are usually made with white flour which can cause blood sugar spikes. For these reasons pancakes are best eaten in moderation. It’s also better to opt for homemade pancakes rather than processed ones, which may contain hidden sugar and salt.

The secret to making good pancakes is resting the batter for at least 10 minutes, or even overnight before cooking. This allows time for the flour to hydrate and soften, eliminating any lumps and distributing the bubbles to give you a perfectly lifted pancake.

What’s the difference between a pancake and a crêpe?

There is no difference between a traditional pancake and a crêpe. However, the fat American style pancakes are different to a crêpe because they include raising agents such as baking soda in the ingredients to ensure they are fluffy.

Why are pancakes eaten on Shrove Tuesday?

Pancakes are eaten on Shrove Tuesday because around A.D. 600 Pope St. Gregory prohibited Christians from eating any meat and animal products during Lent. Christians began to make pancakes before Lent to use up all the ingredients they would not be allowed to consume for the next 40 days.

Even though most people no longer observe this rule, the tradition of eating pancakes has remained. 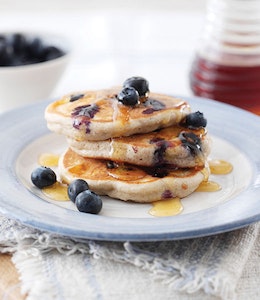 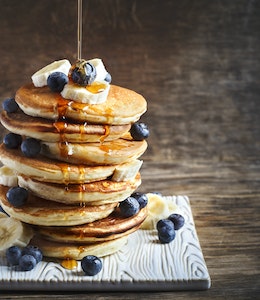