What’s the best cooking oil for frying chips? Or the best oil for baking with? With different oils having different flavour strengths and smoke points there’s a lot to consider when selecting the right choice for what you need.

That’s why we’ve put together this guide of everything from the best cooking oil for roasting potatoes to the best oil for weight loss...

The best oils for cooking at high temperatures are those that maintain their stability when heated (if they don’t they will break down and produce compounds that are bad for the body).

Refined avocado oil is generally considered to be the (plant-based) with the highest smoke point of around 265 degrees celsius.

Avocado oil is a type of oil made from the pulp of avocados.

Whilst it can be used in beauty and hygiene products, it is also a common ingredient in sweet and savoury dishes.

It is one of the healthiest cooking oils, and is high (good) monounsaturated fat, with a subtle buttery flavour.

Because refined avocado oil has a very high smoke point at around 265-270 degrees celsius, and as such is very effective when frying, sauteing and roasting.

Whilst the effect of roasting on food is always (supposed to be) the same, making it juicy and caramelised, the roasting process can be done at different temperatures depending on the dish and how long it's in the oven.

Therefore different oils with different smoke points can be used. Extra virgin olive oil and coconut are both good for slow roasts due to their low smoke point and added flavour, whilst vegetable oil and rapeseed oil are neutral, medium smoke point oils that are versatile and can be used in most roasts. Non-virgin, refined olive oil and peanut oil are good high-temperature choices and can withstand an extremely hot oven without smoking.

Whilst vegetable and rapeseed oil are both suitable for grilling, as one of the most versatile oils, olive oil is also a good choice.

With a medium smoke point of around 210 degrees celsius, good quality olive oil can be brushed over food and baking trays for grilling to enhance flavour and prevents sticking, whilst remaining full of antioxidants and monounsaturated fatty acid.

Olive oil is a type of oil that comes from olives, which grow on trees native to the Mediterranean. The oil is extracted by pressing the olives - olives can be pressed up to 3 times to obtain oil, with the oil from the first pressing being what is considered the most high quality - known as extra virgin olive oil.

Olive oil is versatile and known for its health properties, it’s full of healthy fats and antioxidants, is thought to lower the risk of cardiovascular disease and has a lower percentage of monounsaturated fat than other oils.

Olive oil has a tangy flavour that can be subtle or stronger depending on the press, and is used for everything from salad dressings to roasting meat.

The best oil for frying is a neutral oil with a high smoke point. Vegetable oil is a good choice as it does not have an overbearing taste and will allow whatever is cooking to retain its flavour, and remain stable at the temperature required for frying (the exact smoke point may vary depending on the vegetable blend but it will be around 220 degrees celsius.

Vegetable oil is also one of the cheapest oils, which makes it more cost-effective if it needs topping up during the frying process.

The best cooking oil for roast potatoes depends on whether you want the potatoes to be crispy or healthy or suitable for vegans.

Some oils are better for texture but might affect the flavour, whilst others may only work at lower roasting temperatures.

Basically, there is an oil or fat for every roast potato requirement and our guide here can tell you exactly which one is right for your roasties. 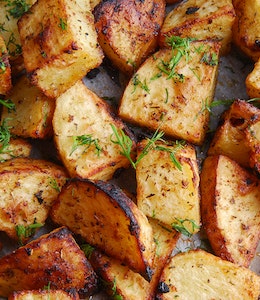 The best fat for roast potatoes

Vegetable oil is a type of cooking oil made from a blend of other plant-derived oils.

The exact ratio and blend can vary but rapeseed oil, corn oil and sunflower oil are all commonly used.

Relatively healthy, and known for its neutral flavour and general versatlity, vegetable oil is also able to be used more than once (although it’s recommended to sieve between uses and be aware that it degrades with each use).

This makes it particularly cost-effective for things like frying.

The best oil for deep frying is vegetable oil, as it can be used cheaply in large quantities and will not overpower the flavour of whatever is being fried. However, peanut oil is another great choice, as it has a very high smoke point and will give deep-fry items such as fries a moreish after-taste.

Canola oil - which is also known as rapeseed oil - is the best oil for baking with. Recipes for baked goods often specify canola oil if oil is required, as it does not have a strong flavour and results in a moist yet airy texture.

Canola oil - or rapeseed oil as it is more commonly known in the UK, is a type of vegetable oil extracted from the canola plant using synthetic chemicals.

Rapeseed oil has a high smoke point and a light, neutral taste, which combined with the fact that it contains a lower amount of saturated fat than any other vegetable oil, make it one of the most commonly used for culinary purposes.

Canola or rapeseed oil can also be sold as cold-pressed and used in a similar way to extra virgin olive oil.

The best cooking oil for vegans depends on what they are cooking and how they are cooking it. Since most cooking oils are plant-based they are suitable for those on a vegan diet and can be used as required. Olive oil is a popular all-round oil of choice as it is nutritionally rich and contains high amounts of monounsaturated fats.

Coconut oil is a type of oil derived from the coconut palm fruit. The oil can come from the wick, meat and even the milk of the coconut.

The oil has a distinctive coconut tang and is rich in fatty acids.

Whilst commonly used for cooking - particularly in Asian cuisine - coconut oil is also frequently used in toiletries and beauty products.

The best cooking oil for chips is sunflower oil, as it is high in polyunsaturated fats, has a relatively high smoke point and leaves chips crispy - it’s particularly suitable for air frying.

However, lard and beef dripping (though not oils) are generally considered to be the very best fat for chips that are golden and moreish, due to their flavour and very high smoke point.

Whilst there are many heart-healthy cooking oils that lower harmful low-density lipoprotein (LDL) cholesterol (which is bad for the body) such as sunflower oil, peanut oil and canola/rapeseed oil, the best oil for cholesterol is safflower oil.

Safflower oil is rich in linoleic acid which is thought to reduce the risk of heart disease, lower blood pressure and help prevent blood clots.

Most importantly, safflower oil lowers the level of bad cholesterol in the blood without having a negative effect on good cholesterol. 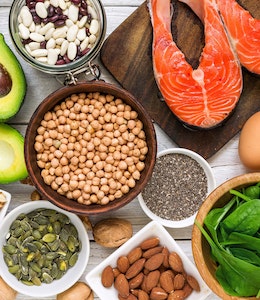 Several oils can be good for weight loss, including olive oil, which helps you to feel fuller for longer and avoid overeating and contains lots of monounsaturated fatty acids. Another oil thought to be helpful for weight loss is coconut oil, which contains healthy saturated fats and medium-chain triglycerides, which are thought to increase metabolism and aid weight loss. Some sources also claim that extra virgin coconut oil can help target abdominal fat. 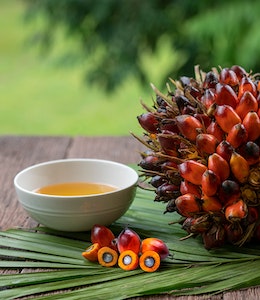 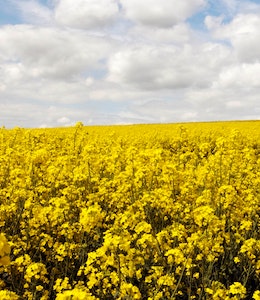