Pies, the ultimate comfort food. A menu staple, a hearty meal, a snack, the humble pie is a national institution. Little wonder then that we have a whole week dedicated to celebrating them.

Yes, British Pie Week has come round again. Last time, we spoke to some of our favourite pie Manufacturers about what it is that defines a pie and in Episode 3 of the Erudus Podcast host Andrew spoke to Pie Minister MD and co-founder Tristan Hogg.

Now we’re rounding up the world’s most popular pies and the top tips that will make them the star of your meal or menu.

Whether you prefer a sweet or savoury pie generally depends on what side of the Atlantic you’re on - we British adore meat and vegetable varieties whilst our American friends are famous for their dessert pies. Still, one thing they have in common is that they’re all delicious - especially if you follow our advice when it comes to these most popular pies…

Now onto the tips...

What it is: Often confused with ‘Cottage Pie’ - which uses beef - the Shepherd’s Pie has been a British culinary staple since at least 1854 and involves a layer of diced lamb cooked with onions and carrots (and either a gravy or tomato based sauce), topped with a mashed potato crust.

Potential Allergens: Of the 14 major food allergens, Shepherd’s Pie is most likely to include Milk, used to flavour the mashed potato. Some recipes will also include flour (Cereals containing Gluten) and Celery in the sauce.

What it is: Arguably the country’s favourite pie, it’s main component is the beef chuck and beef kidney in gravy filling. The gravy’s thick texture comes from either flour or cornstarch, and extra flavour might come from the addition of Worcestershire sauce and vegetables. Shortcrust pastry is commonly used for this dish, though puff pastry is also popular.

Potential Allergens: Cereals containing Gluten (via flour) and Milk (via butter) will almost certainly be in the pastry if not otherwise stated, and some recipes may also include Celery and Mustard.

What it is: Eaten cold, and mostly as a snack, the Pork Pie is a great option on British tapas or ‘Light Bites’ menus. It consists of a chopped pork filling, surrounded by a distinctive layer of pork ‘jelly’ (jellied pork stock) and encased in shortcrust pastry.

Potential Allergens: Allergens: Cereals containing Gluten (via flour) in the pastry (and potentially Milk too). Often the pie will be finished with an Egg.

What it is: Also known as Fisherman’s Pie, this winter favourite is another that uses mashed potato as the top layer rather than pastry. The filling is made of white fish in cheese sauce, sometimes with the addition of prawns. Smoked haddock tends to be the fish of choice here.

Potential Allergens: Fish Pie can be a minefield for allergy sufferers. Aside from the obvious (Fish), its sauce may also include Crustaceans, Molluscs, Milk, Celery and Cereals containing Gluten.

What it is: With a creamy white wine sauce flavoured with herbs (thyme and tarragon), leeks and mushrooms, this chicken pie is suitable with most types of pastry. It’s a popular choice for a pot and plate pies, and can be eaten hot or cold.

What it is: A dessert pie consisting of a pastry base and lemon curd filling, topped with crunchy meringue.

Potential Allergens: Egg is a key component in meringue, and there is also Milk (via butter) and Cereals containing Gluten (via flour) in the pastry. Lemons are a citrus fruit - an increasingly common allergen.

What it is: Somehow both quintessentially English and American, this may be the most famous pie of all. In Britain it goes back to the 1300s, and the earliest recipe includes figs and raisins. Modern recipes tend to consist of apples, sugar, butter and cinnamon encased in shortcrust pastry. The base of the pie is sometimes baked separately to avoid the much dreaded ‘soggy bottom’.

Potential Allergens: Egg, Cereals containing Gluten (via flour) and Milk (via butter) are all likely to be found in an apple pie.

What it is: Another icon of the USA, Key Lime Pie traditionally consists of just 5 ingredients - egg yolk, graham cracker crumbs, butter, condensed milk and most importantly, Key lime juice (which comes from the tart, pale yellow limes of the Florida Keys). Most recipes outside of America make do with regular lime juice (and sometimes even lemon).

Potential Allergens: Egg and Milk in the filling, and Cereals containing Gluten (in the cracker or biscuit crust). Limes are a citrus fruit and an upcoming allergen but not one of the 14 major allergens.

What it is: A staple of the American (and Canadian) Thanksgiving meal, around since at least the early 19th century. The pie traditionally has a flakey crust, and a famous filling of cream, diced or pureed pumpkin and various spices - often sold as ‘pumpkin spice’.

Potential Allergens: Milk (via butter and cream) and Cereals containing Gluten (via flour).

What it is: A snack sized pie that everyone in the United Kingdom associates with Christmas, the ingredients of which hark back to the 1200s - when men returning to Europe from the Crusades brought with them recipes containing sweet meats, fruits and spices. The pies should be small and perfectly formed, made of shortcrust pastry and filled with mincemeat. Mincemeat can include candied fruit, brown sugar, dried fruit, raisins, sultanas, nutmeg, rum, cider, cloves, allspice and ginger.

Potential Allergens: The usual Milk (via butter and cream) and Cereals containing Gluten (via flour) applies, and if you have used apple cider or apple cider vinegar you may also need to be cautious of Sulphur Dioxide.

What are the different types of pie pastry?

There are several types of pasty that are popular for pies. These include:

Are there any allergens in pastry?

Yes, most pasty recipes contain one or more of the 14 major food allergens. Butter (Milk is an allergen) and Flour (Cereals containing Gluten is an allergen) are found in many pastries. Several pastries also include an Egg wash as a finishing touch.

Yes, most pastry is vegetarian. The exception is pastry that uses suet. Suet is raw fat sourced from the loin area of beef or mutton.

Most traditional pastry is not vegan. Pastry needs fat, and this is usually in the form of butter or suet (animal fat). Some pastries use oil instead of butter but you should always check the label of any pastry to make sure it is suitable for your diet. 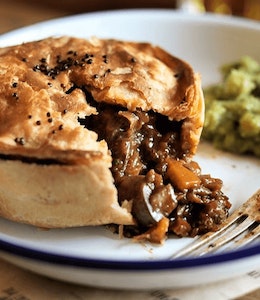 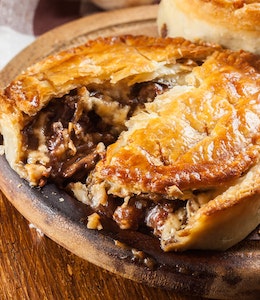 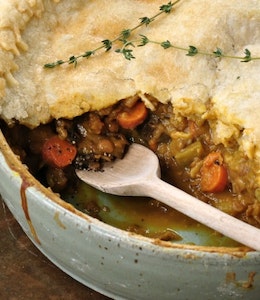