If you’ve listened to the latest episode of The Erudus Podcast you’ll know July is Ice Cream Month.

While host Andrew delves into the ins and out of running a successful ice cream business with special guest David Baker, owner of the hugely popular Styles Ice Cream, over here on The Food Agenda we’re celebrating the taste of summer by answering the most frequently asked questions about ice cream...

What is ice cream made of?

Ice cream is made from (dairy) milk, sugar and cream. These are the primary ingredients, but many varieties also contain additions such as cocoa, egg yolk, vanilla and custard powder.

Depending on the flavour, ice cream might also have ingredients such as fruit, nuts or chocolate.

Ice cream has a long history - as far back 500 BC Persians ate flavoured ices in hot weather. Some credit the invention of ice cream to China, where a frozen milk and rice mixture was eaten circa 200 BC. Ice cream came to the UK in the 19th century when a Swiss immigrant called Carlo Gatti set up an ice cream stand outside London’s Charing Cross station.

Is gelato the same as ice cream?

Ice cream and gelato are similar but they are not the same. Gelato uses the same base ingredients as ice cream – milk, cream, sugar (and sometimes egg) - though it has more milk than ice cream and less cream. Crucially, gelato is churned at a much slower rate, giving it a silkier and denser texture.

Flavours come through more intensely in gelato – chocolate gelato will taste more chocolatey than chocolate ice cream, though the flavour won’t linger on the tongue as much as it will from other desserts. Ice cream is lighter than gelato and takes longer to melt.

Is ice cream good for you?

In moderation, ice cream can be good for you. It contains milk and cream, which are both rich sources of calcium, as well as vitamins D and A. They also contain riboflavin and phosphorus, which gives your body tissue oxygen.

Ice cream is classed as a ‘fermented dairy’, which means it protects the body from gastrointestinal infections and contributes to gut health. However it is also high in fat and calories, and if consumed in large quantities can lead to weight gain and put pressure on the body’s organs.

Is ice cream bad for your teeth?

Ice cream is bad for your teeth because sugar is one of its main ingredients. Bacteria in the mouth feeds off and combines with sugar to destroy tooth enamel, resulting in tooth decay. If sugar is left on the teeth (and not cleaned off or flushed out), it can eat away even further to create cavities that contribute to tooth loss.

There are many low-sugar ice creams on the market, and eating fruit and nuts alongside ice cream can help stimulate the production of saliva to reduce the risk of tooth decay. Read our feature on foods that are good for your teeth to find out more.

Ice cream is usually vegetarian, but some varieties are not. Several vanilla ice creams are flavoured with castoreum, which beavers use to mark their territory. Capric acid (which is derived from animal fat) can also be found in some ice creams. Those who follow a vegetarian diet should always check ingredients labels to ensure a product is suitable for them to eat.

No, ice cream is not vegan. Cows milk (and cream, which also comes from cows milk) are primary ingredients in ice cream.

Can you get vegan ice cream?

Yes, there are many varieties of vegan ice cream available to buy and in fact vegan ice cream recipes were recorded as far back as 1899. Vegan ice cream is predominantly made from plant-based milk, such as soy, almond, oat or rice milk. Though almond milk is generally considered the most popular non-dairy milk, cashew and coconut milk are the best varieties for making ice cream because they have a higher fat content.

The high water content in all vegan milks means that vegan ice cream is rarely as creamy as its dairy counterpart (though the addition of ingredients such as cornstarch can help to thicken it), and also causes it to freeze faster.

Can you be allergic to ice cream?

Does ice cream contain any allergens?

Can you eat ice cream if you are lactose intolerant?

No, you cannot eat ice cream if you are lactose intolerant unless it is a lactose-free variety. Lactose intolerance is the body’s negative reaction to lactose, which is a sugar found in milk and dairy products. Milk and cream are dairy products, and they are main ingredients in ice cream.

What are the most popular flavours of ice cream?

Vanilla is considered to be the most popular flavour of ice cream. Other traditional ice cream flavours include chocolate, strawberry, mint choc chip, rum and raisin, coffee, and raspberry ripple.

In recent years varieties such as peanut butter, pistachio, salted caramel, fudge and cookie dough have all gained popularity.

What can you eat ice cream with?

You can eat ice cream with many foods. When eaten as a snack it is traditionally served in a wafer or sugar cone, and for years no children’s birthday party was complete without ice cream and jelly.

On the dessert menu, cakes, cobblers, brownies and puddings are often served with ice cream on the side. The addition of chocolate and/or strawberry sauce, fruit, nuts and sprinkles to ice cream turn it into a sundae, or Knickerbocker Glory. Ice cream is also a main ingredient in dishes like Baked Alaska, ice cream cake, banana split and arctic roll. 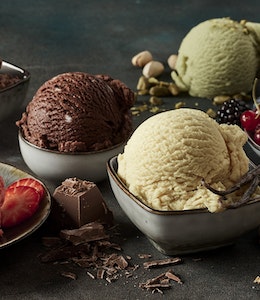 Ice Cream vs. Gelato vs. Sorbet