Crustaceans are the star ingredient in many favourite recipes from around the globe - for instance September sees us celebrate World Paella Day (shrimp served in the shell is a key part of many paella recipes), and there are countless web pages dedicated to identifying America’s best lobster roll.

Add in the fact that crustaceans are a cornerstone of Asian cuisine and it’s obvious that they’re a hard food to avoid. They’re also one of the 14 major food allergens, and a health risk for some people.

So, read on to find everything you need to know about a Crustacean allergy, including the foods you need to watch out for and what the symptoms look like...

Crustaceans are arthropods - invertebrates that have an exoskeleton and a segmented body. Though classed as ‘seafood’, Crustaceans biologically have more in common with insects than with fish. Some types of Crustaceans are:

Can you be allergic to Crustaceans?

Yes, you can be allergic to Crustaceans - many people refer to this as a ‘Shellfish allergy’, though the term shellfish refers to both ‘Crustaceans’ and ‘Molluscs’, which are classed as different allergens. Because shellfish are not closely related to finned fish, people with a Fish allergy do not necessarily have a Crustaceans allergy.

Of the different types of Crustaceans, shrimp is the most common allergen.

What is a Crustacean allergy?

An allergy to Crustaceans will trigger a negative reaction from a person’s immune system if they consume a food or drink containing the type of crustacean they are allergic to (a person may be allergic to several types of crustacean).

Tropomyosin is the protein in Crustaceans that most commonly causes an allergic reaction, and it can also be present in Molluscs, another type of shellfish (tropomyosin can also be found in the shells of dust mites).

What is a Crustacean intolerance?

A Crustacean (or wider shellfish) allergy is particularly associated with digestive problems, and symptoms such as diarrhea.

It’s also worth bearing in mind that anyone can become ill after eating raw or undercooked shellfish.

What food and drinks do you find Crustaceans in?

Crustaceans can also be found in

Crustaceans are a very common ingredient in Asian cuisine, particularly in sauces, curries and soups.

What are surprising foods that contain Crustaceans?

When eating Asian cuisine it’s worth noting that Crustaceans may be an ingredient in many dishes, particularly those with sauces and soups.

Outside of that, Crustaceans are rarely hidden in food and drink. However, you may be surprised that the following products contain them:

What’s another name for Crustaceans?

Usually the Crustacean ingredient will be the name of the specific crustaceans or crustaceans used - e.g. Crab, or Crab and Lobster.

You should also check the ingredients of anything described in the name as ‘Sea Food’.

What does an allergic reaction to Crustaceans look like?

Crustacean allergy symptoms usually appear within an hour of eating or coming into contact with the allergen. These symptoms include:

An allergic reaction may also result in anaphylaxis, particularly in a Crustacean allergy. This can be fatal, and the symptoms include

How do you treat a Crustacean allergy?

A Crustacean allergy is best treated by checking ingredients and avoiding foods and drinks that contain shellfish. If a mild reaction is suffered, antihistamines may help.

How can I avoid Crustaceans?

Because cooking with Crustaceans is a process that can involve cross-contamination, it is probably safer for those with a Crustacean (or wider shellfish allergy) to avoid seafood restaurants - because not only could there be cross-contamination in the kitchen, but menus, condiments and other tableware may also be at risk.

What’s an alternative for Crustaceans?

Many people think imitation crab is an alternative to real crab, and whilst it is made from surimi (a pulverised fish) - which is not a Crustacean - it is not usually safe for those with a Crustacean or Mollusc allergy to eat. However, Kosher Surimi is available to buy, and contains no shellfish.

Other common substitutes for Crustaceans in food products are monkfish (as an alternative to lobster) and mushrooms. There are also many vegan versions of crab and shrimp on the market.

Are Crustaceans one of the 14 major food allergens?

Crustaceans are one of the 14 major food allergens.

This means that pre-packed food sold in the UK, and the rest of the European Union, must clearly indicate on the label if it contains Crustaceans. 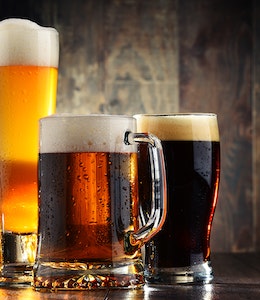