The traditional Bakewell tart is a British institution, a fruity creamy dessert so feted it even has its own day (celebrated 11 August). A great addition to any pudding menu, it has the perfect mix of nostalgia and timelessness to appeal to all kinds of customers.

But what are the best Bakewell tart ingredients? Does it contain any allergens? What is the best thing to serve it with? Well, we have all the answers and some top tips for making your own...

What is a Bakewell tart?

A Bakewell tart is a baked dessert associated with the town Bakewell in Derbyshire, England.

It is made with shortcrust pastry and filled with jam and frangipane and topped with flaked almonds (and in the case of a cherry Bakewell, a halved glacé cherry).

The Bakewell tart evolved from the Bakewell pudding, and the two names are often interchanged and used for the same thing.

Why is it called a Bakewell tart?

Do not allow your oven to get too hot - this will cook the outside of the tart much quicker than the inside and result in either a burnt tart or an underbaked filling.

What are the ingredients in a Bakewell tart?

There are multiple ingredients in a Bakewell tart. The base tart is made from a shortcrust pastry of butter, flour, salt and water, then comes a layer of jam made from fruit (strawberries or raspberries) and sugar, then a layer of frangipane - made from butter, eggs, ground almonds, sugar, almond extract and some flour. The tart is topped with flaked almonds.

What’s the difference between Bakewell tart and frangipane?

Frangipane is an Italian word, recorded in a confectioners dictionary as far back as 1732 and is thought to have come from Marquis Muzio Frangipani or Cesare Frangipani. Whilst frangipane recipes can vary, it is generally made from two parts almond cream (typical ingredients are butter, sugar, eggs, ground almonds, bread flour, and rum) and one part pastry cream (typical ingredients are milk, vanilla beans, cornstarch, sugar, egg and butter).

Some old Bakewell tart (and Bakewell pudding recipes) use a custard filling instead of frangipane.

Blind-bake the pastry tart shell before cooking with the filling, for a better crust texture.

What pastry is Bakewell tart made from?

Bakewell tart is made from shortcrust pastry, which is a crumbly and buttery pastry made using the “shortening” method. Shortcrust pastry is made with butter (or some type of fat), flour (usually wheat), salt and water, with the ratio being 1 part fat to 4 parts flour.

What do you serve with Bakewell tart?

Using low-sugar jam instead of regular jam isn’t just a lower calorie option, it will give a more subtle taste for those without a sweet tooth.

Does Bakewell tart contain any allergens?

A traditional Bakewell tart contains several of the 14 major food allergens. These are:

No, traditional Bakewell tart is not vegan as it contains several animal-derived ingredients, including butter and eggs.

The filling of a Bakewell tart should be "just set". So take it out of the oven before it gets too firm.

No, Bakewell tart is not usually gluten-free, as it has a pastry base made with wheat flour. Wheat is a Cereal containing Gluten.

What’s the difference between a Bakewell tart and a cherry Bakewell?

A Cherry Bakewell is a version of the Bakewell tart where a layer of almond fondant is added on top of the frangipane and topped with a halved glacé cherry. Cherry Bakewells are usually small and served as individual tarts, whereas the traditional Bakewell tart is a tray bake cut into slices post-oven.

Add a pinch of baking powder to the frangipane to make it pack an extra punch. 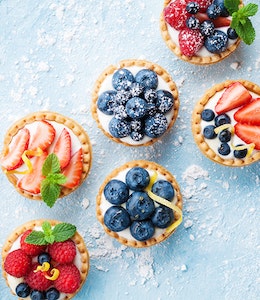 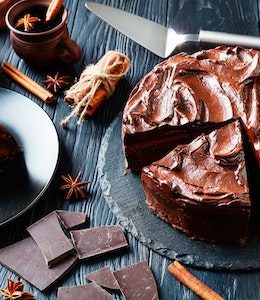